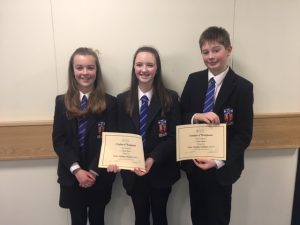 Pictured above are pupils who won their first heat of the Procurator Fiscal Junior Public Speaking Competition.  They won on February 21st at Banff Academy. They will be competing for a second time on March 14th in the Grampian Schools Semi Finals at the Council Chamber in the Town House. Our second team also performed very well at Albyn, however they did not make it any further in the competition.

All S2 pupils, in the photograph :