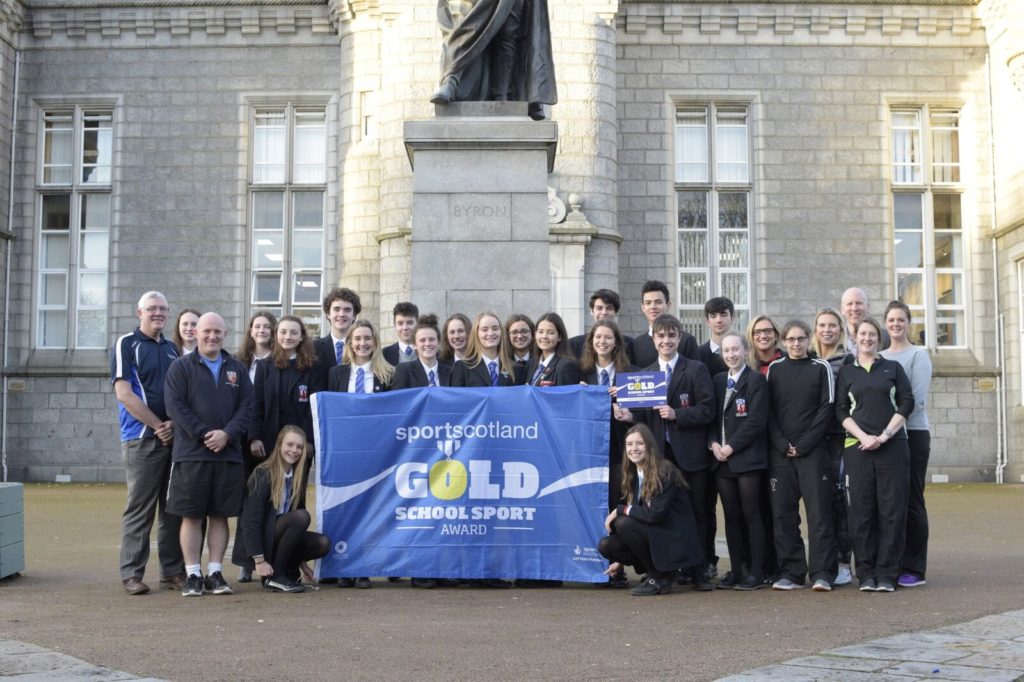 This week Aberdeen Grammar staff and pupils celebrated being awarded the Gold Award for Sport.

This year, Aberdeen Grammar has received two awards for their involvement with sport within the school. The first award was the Secondary School of the Year at the Aberdeen Sports Awards and the second one was the Gold award at the Sport Scotland Schools Sports Awards. We won the award for many different areas, the first one being physical education within the school. They looked at our curriculum, activities done during PE, the home workout and the social media accounts that have impacted our pupils physically and mentally. Another requirement that had to be met was the number of clubs in the school and the number of participants attended. 45% of the entire school body are registered and participate in active school clubs. In the school year 2016/17, the school were involved with 15 local sport clubs to enhance school sport programmes. We have a strong link with with Aberdeen Grammar Former Pupils Club. There’s a vast number of competitions and events which the school attends. At local and national competitions we are successful. Our school attends many events per year such as the Aberdeen Youth Games, the Giant Heptathlon and Scottish Schools Cross Country. We are also widely involved with the local primary schools. In school we have the Grammar Games and health week. We have a lot of opportunities for leadership such as sports committee, young ambassadors and over 65 pupils lead school sessions.The staff also do career long professional training to develop skills to lead our clubs. Our PE staff run an instagram, twitter and facebook account. Our facebook page has over 700 likes and our instagram has over 700 followers. There are a key tool for recognising our volunteers. We also nominate staff for awards such as Mr Ross Allan (PE teacher and Principal Teacher of Pupil Support) who won the Aberdeen City Council Star Award. To conclude, our school has 4 facilities which clubs over Aberdeen can use. We have the games hall, the small hall, the swimming pool and the astro turf. These are amazing achievements as only two schools in Aberdeen have the Gold award and

we’re the most recognised school in Aberdeen.